As some of you may already know, I've been working on my first book for the majority of this year.  With a number of life obstacles now out of the way, I'm happy to announce that it will street on January 29, 2013.

It will be available in both print and e-book format via Amazon.  I'm exploring options for availability via other e-book apps, so stay tuned.

Moreover, I know I've kinda neglected this blog (the last post being way back in April).  I'm going to try to be more frequent with posts.  Furthermore, I plan to start work on a second book in a few months (yeah, I'd like to take a bit of a break after this first one).

I'm also planning to set up a website for the first book as well as a Youtube channel showcasing videos dealing with entitlement syndrome (if I can be so bold).  Both should be live sometime after the New Year and certainly before the book streets.

I'll close in saying I hope all of you have a very Merry Christmas and a prosperous New Year.  To my Jewish friends, I hope your Hanukkah season was lovely!

Waging War on the House Frau!

If there was such a thing as a Horse's Ass Award, Hilary Rosen would have one sitting on her mantlepiece!

The DNC advisor and Obama cheerleader stated on CNN yesterday that Ann Romney has "never worked a day in her life". Straight from the horse's mouth:

And here she is this morning doing a bit of tap dancing:

Sure, I understand that some women have no choice but to work even though they have kids. I get it! But all the tap dancing in the world won't change the fact that Hilary was attacking Ann for choosing to be a stay-at-home mom. Hilary obviously believes that women absolutely have to have a career outside the home to be fulfilled otherwise they're reduced to nothing more than submissive house fraus controlled by men. That somehow Ann is a more recent version of June Cleaver.

Epic fail here, sorry! Nothing wrong with women who are financially able to stay at home to raise the kids if they choose to do so. We hear Hilary Rosen and her ilk screaming about pro-choice ad nauseum, but I suppose it's limited to abortion only. Stay-at-home moms are treated like traitors, like they were forced into their positions rather than choosing them. I remember my late mother (also a stay-at-home mom) coming home one day when I was in my teens upset about a snide remark made to her by a female bank teller, something along the lines of "Oh, so you don't have a job!". I believe, from what she told me, that she retorted something like she's raising two boys, a full time job in itself, and fired back that the employee is a "pissant bank teller". My mom had never been one to back down from a verbal challenge!

As I'm typing this, the morning news is still buzzing about Hilary Rosen's idiotic comments! Not helping her boss's cause, that's for certain!

Till next time, peace!

Sorry my posts have become sporadic; I've been working on a book. I can tell you that the working title of it is "GIMMEE, GIMMEE, GIMMEE!". Yeah, really eye-catching, I know. It deals with the entitlement mentality that is increasingly more commonplace. It's going to cross all class and race lines, so no one can accuse me of attacking people on the dole. Many people of all income brackets have their hands sticking out, and you'll see why and how. I'm expecting completion and publication by late summer or early fall and will be available both in print and as an e-book. I'll provide more details in future blog posts, so if you're not already following this blog, go ahead and click the "Follow" button in the upper left
Posted by Alan W. Wright at 8:00 AM No comments:

More stealth jihad! It's not enough that idiotic public school teachers invite representatives of Hamas-linked CAIR to their classrooms to brainwas...er, I mean, speak to the students. Now the push is on (and has been for at least the past decade) to inject pro-Islam/anti-Christian (and anti-Western) propaganda into our children's textbooks. Here's the link I found at Infidel Blogger's Alliance.
Posted by Alan W. Wright at 11:38 AM No comments:

Just like when the American Embassy in Tehran was stormed in 1979, the British Embassy there is now feeling the wrath of crazed Iranian protesters who hate all things Western and are using the passing of an Iranian bill to reduce diplomatic ties with Britain as an excuse to wreak all kinds of havoc and mayhem. And now I'm getting word that hostages have been taken. Here's a story link:

Apparently we haven't learned the lessons of the 1979 situation. Why any Western country still maintains an embassy there is baffling. Iran is by no means docile and should be taken seriously. The documentary "Iranium" should be required viewing. Here's a trailer:

Death At A Discount! Limited Time Only!

No matter what side of the abortion issue you're on, you can't deny that the coupon pictured below treats the procedure with a cavalier attitude. 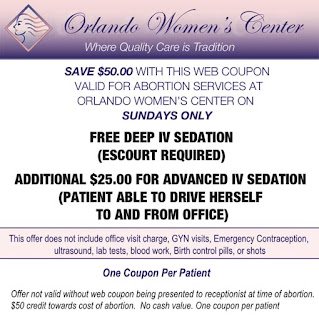 Aside from the gall to put a abortion on the same level as getting a discount on an oil change or teeth whitening via coupons, this clinic restricts its use to Sundays only.

Why not Monday? Tuesday? Usually some businesses offer specials and coupons to stimulate business on traditionally slow days like Monday or Tuesday.

But, no, the clinic restricts it specifically to Sunday, perhaps to rub it in the face of pro-life advocates, the majority of whom are regular church attendees. Or maybe the owner of this clinic assumes that pro-lifers will be busy on Sundays with church activities so any protests in front of their clinic will be minimal at best.

In any event, it clearly shows poor taste to even offer a coupon or special on something like this! Obviously abortion is big business! But I guess business is so bad at this clinic that they have to resort to issuing coupons. The only thing that could be possible be worse is if they issue some kind of frequent user's card that gets punched on every visit until the user gets enough punches to get a free abortion.

As if life couldn't be cheapened any further...

So if a dog can't be housebroken...

...isn't it time to get rid of it?
No, this post isn't about pet ownership; it's about the occupiers of Wall Street and even those elsewhere around the US and the world.

I have no problem with the right of these unwashed masses to protest, but after 3 weeks and beyond, they are becoming quite the nuisance. Aside from the fact that many at Occupy Wall Street and other protest sites haven't a clue as to why they're there (see the videos below if you don't believe me), they are also engaging in behavior that clearly undermines their movement and impedes any progress for them to be taken seriously. Sorry, but activities like defecating on sidewalks (and even police cars!), banging drums, partaking in illegal drug use, and having sex in plain view of other park squatters are eventually going to raise the ire of the mayor on down to rank-and-file police officers to the point of shouting "enough is enough!"

And now the word is out that theft is occurring amongst the smelly squatters. Imagine that; the same people screaming about wealth redistribution are having their own possessions redistributed, including a $5500 Mac. How ironic is that?

Eventually the authorities are going to put out the call to clear Zuccotti Park and the surrounding area, if nothing else, for safety and health reasons. After over three weeks, it cannot be very sanitary around that area, what with all the trash, bodily waste, and lack of personal hygiene. It's only a matter of time before rats and other vermin overtake the area if they haven't started doing so already. And then comes the possibility of disease breaking out. Of course if protestors start getting sick they'll blame that on Wall Street, too.

The dog is crapping on the floor and it won't stop; time to get rid of it!

Not only does it pee and poop wherever it pleases; it's also destructive as you see above!

Just because they're poor doesn't give them the right to be scumbags!

I've been keeping an eye on the riots that have erupted in London. It looks like that the violence and looting could spread to other parts of England, perhaps even reaching into Wales and Scotland.

I've also been observing the Philadelphia flash mob attacks as well as those that occurred at the Wisconsin State Fair. Here's news links to those for those of you who haven't heard about them as it seems that the national media has provided little coverage, especially about what went on in Wisconsin:

So now we're hearing of the excuses for the riots, the attacks, and the looting:

"They have no money or a job!"

"The white man is keeping them down!"

"They can't make it without more help from the government!"

Thousands of excuses can be made for such behavior, but none can cover the fact that said behavior is just plain wrong! Unfortunately the majority of black youths are raised in fatherless homes with little to no moral guidance from whoever the authority figure is in the home (mother, grandmother, aunt, etc.) thus we now have a generation of young hoodlums unleashed onto the world! Bottom line, it begins at home, and no amount of excuses or blame will negate that! So until we see a change in this "the-world-owes-me" mentality to something more of a "can-do" attitude, we will see more flareups like the mayhem we've seen over the past week!

Peace (more than ever!)!

Save with The Customer Advantage

You can get paid for referring others!

Buy The Truth About Muhammed Today!

Brutally Murdered By Their Coward Of A Father!

Favorite Blogs and Links - NOTE: I do not necessarily endorse every view expressed at every site!